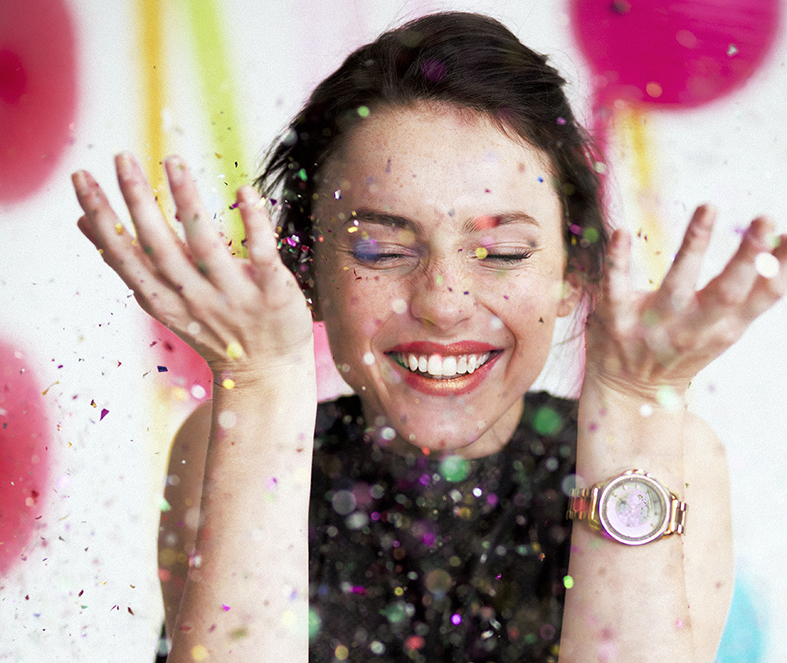 Some of us are worriers. If you need someone to Google any medical symptoms you may be having, or ask you if you’ve definitely locked the door for the 20th time, then I’m your girl. What I’m not so good at is recognising that life can throw up pleasant surprises as well as nasty ones. I’ll walk over the pound coin on the ground; I’ll only see the mud.

My friend Beth, on the other hand, has no time for dark imaginings. She’s goal-focused and a bit of a control freak. When we were clueless teenagers, she’d already planned the age when she would get married (‘25 – I need to live a little first’) and start a family (‘30, so I can build up my career.’) But as it turns out, she’s no better at embracing life’s twists and turns than I am. She might spot the pound coin, but she’d be far too focused on trying to beat her personal best jogging time to pick it up.

I suspect we’re not alone. Many of us can’t let go of the idea that our lives should rumble obediently down the pre-ordained tracks we have set out for them, and it’s easy to become convinced that our pre-made plans are the only route to happiness. What if we’re wrong though? What if, actually, the things we aren’t expecting, haven’t prepared for, and never imagined, can turn out to be the best things of all?

Take Claire Potter, a contracts manager from Oxford. Desperately working on a seven-year relationship that was ‘failing miserably’, she accepted a work trip and ended up meeting the love of her life. She says: ‘We’d never have met ordinarily. He asked whether I wanted to pop out for food. I wasn’t keen on spending an evening with this annoying, enthusiastic young man but I was too polite to say no.’

Five years on, Claire and her ‘enthusiastic young man’ have two children together – and she’s very grateful that she didn’t stick with the straight and narrow. ‘I already had a house, a partner and my career,’ she recalls. ‘Duncan was definitely not in my plan! It’s probably part of the reason I stayed in a failed relationship so long – it wasn’t in my plan not to be there.’

The role of serendipity

It might have been Claire’s decision to do something different, to break with habit and say yes to the work trip – and to dinner – that led her to her ‘happy accident’. Professor Ben Fletcher, who champions the benefits of stepping beyond our comfort zones in his book Flex: Do Something Different (University of Hertfordshire Press, £8.99, co-authored with Professor Katherine Pine), certainly thinks that venturing into new territory is key to inviting serendipity into our lives.

‘Serendipity is found in the novel. Habit is its enemy. If we’re unwilling to venture into new territory, then we’re unlikely to encounter that serendipitous new experience,’ he points out. In other words, just by trying out a new hobby, or by taking a different route on our walk to work, without any particular goal in mind, we can create room in our lives for serendipity to come to us.

Of course, it’s also true that despite our best intentions, we’re not always the best judges of what might be right for us. Kathryn Schulz, author of Being Wrong: Adventures In The Margin Of Error (Portobello Books, £9.99), a book that warns against the danger of getting too caught up in our own beliefs about what is ‘right,’ explains. ‘Getting things wrong means there’s something wrong with us, so we keep insisting that we’re right.’

But when we apply this logic to our future plans, we can find ourselves desperately clinging to a role, or a situation, that isn’t working. Sometimes happy accidents can actually end up saving us from ourselves.

For Dr Tori Herridge, even things that seem like a bad idea at the time can work out for the best – a fact that appears contrary to everything we are taught about planning and sensible decisions. She ended up with a focus on science subjects at A-level because the arts ones were getting in the way of her social life, despite always having seen herself as an ‘artsy’ person. But this science route has led her to great success as a paleobiologist at London’s Natural History Museum and co-founder of an organisation celebrating the successes of women in various scientific fields (see trowelblazers.com).

Herridge now believes ‘there are no serious mistakes, as long as you keep moving forwards and working with what you’ve got’.

Given that up to a third of babies born in the UK could be as a result of unplanned pregnancies, according to research published in the British Medical Journal, planning on the perfect time to start a family isn’t always possible. Nikki Shelmerdine fell pregnant with her son after only a few weeks of seeing her partner. But pragmatism along with a tendency to look on the bright side enabled her to re-frame the whole experience as a positive one: ‘I decided I was going to enjoy it just as much as I would have several years down the line,’ explains Nikki. ‘Bonding over the pregnancy brought my partner and me closer.’ Now married to her partner and mother to a little boy, Nikki can’t imagine being anything other than ‘incredibly happy’ with her unexpected family.

Historically, failing to plan actually has a pretty impressive track record, with everything from penicillin to Post-It notes falling under the ‘happy accident’ umbrella. Thousands of lives have been saved because Alexander Fleming left a lab culture unattended, and came back to find a strange fungus (penicillin) growing all over it.

As Schulz suggests, this narrative of huge, life-changing events starting out by accident is even a part of what makes us human: ‘Getting too hung up on the rightness of our plans misses the point when all of our stories are about being wrong; we love plot twists, surprise endings, red herrings. But actually, our stories are like this because our lives are like this.’ And as any avid reader will tell you, sometimes the plot twists are the really exciting part.

Tales of the unexpected

What it comes down to is that embracing the unexpected – even seeking it out – really can be worthwhile. After all, when I think about it honestly, some of the best things in my life are less to do with meticulous planning and more about the times when I was simply focused on enjoying the moment. Eight years ago, when a friend convinced me to give live-action role-playing a try, I never expected to end up with lifelong friends and a (rather wonderful) husband as a direct result. He tells me now it was the fact that I looked like I was having so much fun that caught his initial interest. Had he seen me for the first time in the midst of a drizzly Monday morning routine, the attraction may not have been so overwhelming.

Ultimately, the childish thrill of discovery that buried treasure can yield is even better when it’s a surprise, so the next time that little pound coin shines up at me from the pavement, I’ll be ready. And I won’t let the fact that I haven’t planned any room in my purse for it put me off.

Coach yourself – how do you think your life plan will make you feel?