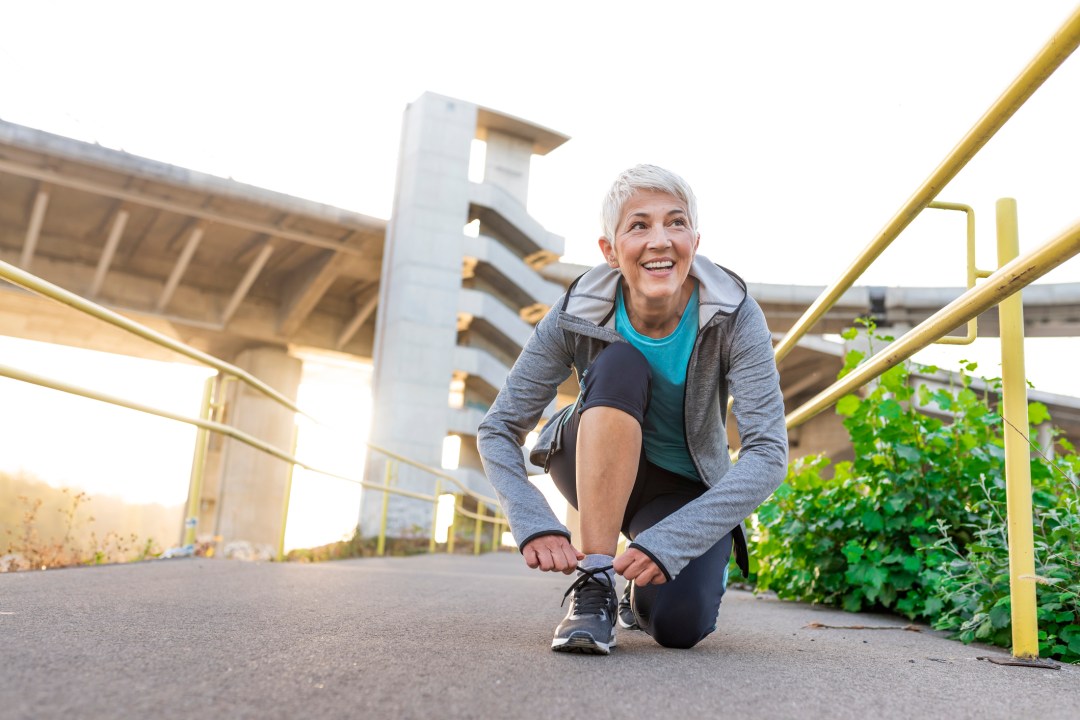 What if someone told you there was an exciting new exercise they’d seen on Instagram, which you could do in as little as 20 minutes a day, that would lift your mood, raise your energy levels, reduce stress, shrink your waist and generally make you feel like a happier human? And, most surprisingly of all, it won’t cost you a thing. We bet you’d be grabbing your phone and frantically searching for this new wonder cure, right? Well, it turns out there is an exercise that ticks all those boxes, apart from the ‘new’ bit: running. And while it might sound like hype, it’s so good for women in midlife it’s a wonder we’re not being urged to do it by the government. But before you turn the page because you’re ‘not a runner’, take a moment to listen to what the experts – and the women who are out there doing it – have to say…

Ask most women how they feel in their 40s and 50s and the word ‘tired’ will invariably be uttered, possibly several times. It’s not surprising when you consider that many of us are sandwiched between ageing parents and teenage children, juggling a career with the demands of family life, while our hormones are doing their own wild dance in the background. Our bodies can suddenly stop behaving as they used to, with problems such as stiffness, weight gain, sleepless nights and anxiety cropping up out of nowhere, flooring even the strongest and most sturdy among us. Amanda Thebe, a personal trainer and the author of Menopocalypse (Greystone, £14.99) describes how, at 42, she ‘got hit with a wrecking ball of crap’. She adds: ‘It felt as if after 25 years of understanding my health, my body was letting me down.’

Kerry Sutton, a running coach, comes across many women in their 40s, 50s and beyond for whom running has become a lifeline as they navigate this new time of life. ‘The first thing I say to women who come to one of my groups or talk to me about starting running is that it’s not about running fast. A lot of people expect to be able to run like they used to when they were younger, so they go out once, run too fast, find it really tough, get put off and don’t go again.’ Sutton encourages anyone who has had a break from running to begin with a walk-run combination, rather than attempting non-stop pavement pounding. ‘Even if you can run for half an hour without stopping, if you haven’t done it for a while everything will have a jolt, you’ll hurt the following day and you probably won’t want to do it again,’ she says. ‘If you’re going to stick with it, you need to build fitness and enjoyment in parallel.’

Understanding your body and how to adapt to physical changes is key to enjoying exercise and feeling confident when everything can feel a little unstable, from your bones to your bits. Juliet McGrattan is a former GP turned running coach who has recently written a book, Run Well, to answer all the questions she is frequently asked by women about running and their health. ‘Running is a journey of discovery,’ says McGrattan. ‘Not just of routes and new places but of your own human body: Your resilience and courage, and your ability to harness the power of running and use it in other areas of your life. But like any journey, there are ups and downs, delays and setbacks.’

Many people are put off by running as they age because of aches and pains, often in the knees, hips or back. However, in most cases, and when combined with strength exercises, running will be more benefi cial than not. ‘Running certainly stresses the musculoskeletal system, but stress isn’t necessarily a bad thing because it’s only by stressing something that it’s made stronger,’ says McGrattan. ‘Muscle mass declines from your 40s and every decade beyond that, so you want to put things in place that will slow that progression,’ agrees Sutton. She always recommends that people support any running programme with some plyometrics (jumping or dynamic exercises) and strength work to ‘scaff old your body, which will help you run further for longer without losing form’. Before you think you don’t have time for that, these exercises can be a short add-on to your run and are easy to do at home (see ‘How to be a happy runner’, below). 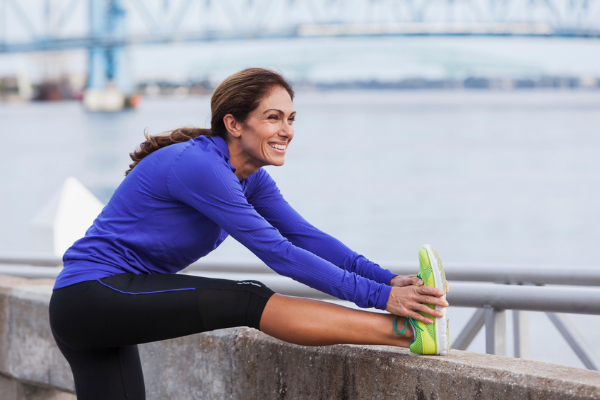 The emotional benefits of running can be every bit as powerful as the physical. When you run, it causes chemical changes in the brain, releasing endorphins that make you feel good during and for a time after your run. It also gets you outdoors, allowing you to see new places and experience the calming powers of nature. ‘Running helps you develop a positive sense of self,’ says McGrattan. ‘It can make you appreciate the power your body has and what it can achieve, which is usually way beyond what you thought your capabilities were.’

She also talks about how running helps bring people into your life, something that she and Sutton experience every day in their running communities. ‘When you run in a group or with a friend you’ve got to turn up, and you will work that bit harder,’ says Sutton. ‘When you come to a hill and you want to stop, if your friend does it, you’ll do it too, even if you don’t feel like it.’

As well as the extra energy, you get emotional support from exercising with others. You might offload what’s worrying you that day or, if you’re in a group, you can listen to other people talking about things and pick up advice and support organically. ‘It’s much easier to talk to people when you’re running side by side rather than sitting face to face,’ says Sutton, who regularly sees women thrown off-kilter by menopause, divorce or illness gain a noticeable lift through running. ‘There’s the flush of endorphins and a feeling of achievement. You’re in control again.’

If life feels too busy and you’re worried running will become another thing to get stressed about, it’s important to remember that time spent running is never wasted time. On the contrary, it can be used to learn, plan, make decisions and come up with ideas. ‘I’ve done all sorts of things while running, from planning children’s parties and developing business ideas to listening to useful podcasts,’ says Sutton. A study at Stanford University found that people are 60 per cent more creative when they’re walking or running. And if you feel guilty because you’re heading out of the door leaving work unfinished, a pile of dishes in the sink or a child wanting help with homework, remind yourself that you’re modelling healthy behaviour and teaching your kids lots of important life skills by getting out there and tackling something challenging. And you can go out for your run safe in the knowledge that you’ll come back to your work, partner and family a happier and calmer version of yourself.

Set yourself a goal. It could be ‘this month I’m going to run or walk 50K’ or ‘I’ll do two loops of the park rather than one’. Make it achievable, with a little bit of stretch.

One thing that puts some women off running is the impact on their pelvic floor after childbirth and as they approach menopause. ‘If you’re leaking urine, feel heaviness, dragging or bulging, then you should seek advice before running because your symptoms may worsen,’ says Emma Brockwell, a physiotherapist.

If you’re feeling OK down there, it’s still important to do pelvic floor exercises as you get older, because the decline in oestrogen levels can lead to weakening of the pelvic floor (as many as half of women over 50 experience some urinary leaking regularly). ‘Pelvic floor dysfunction does not mean you can’t ever return to running,’ says Brockwell. ‘You may just need to build up gradually with a programme of strength training and pelvic floor exercises, but it’s important that you do this with the right help and advice.’

In the meantime, fast walking offers many of the benefits of a run without the same high impact on the body. 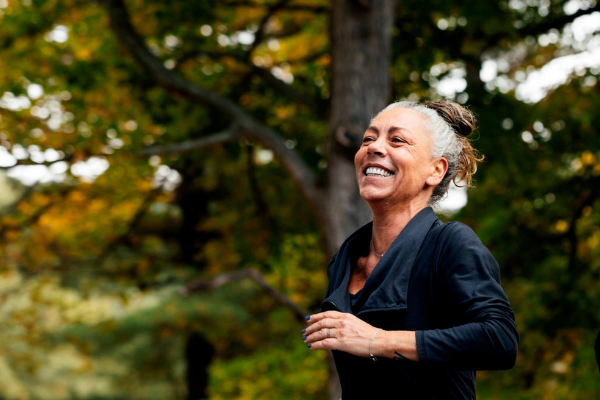 How to be a happy runner

Download: The Squeezy app from the NHS, which has exercises, reminders and information about your pelvic health

Join: A running club near you. Check out Parkrun for 5K runs on Saturday mornings around the country.

Why BMI is flawed & must be abolished – Felicity Hayward

Curve model, body positivity activist and author Felicity Hayward tells us why BMI is an outdated measure that ought to be abolished…