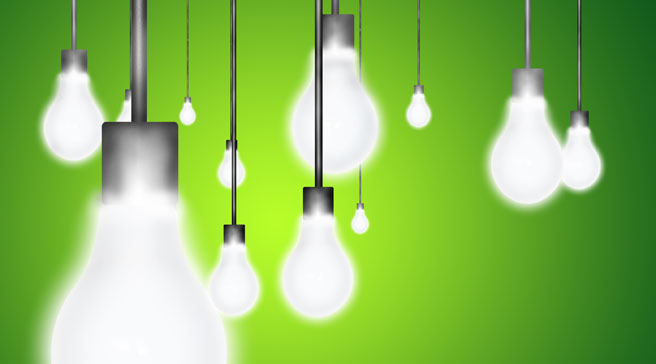 Recently, two entrepreneurs hit the headlines after enjoying unprecedented success on Dragons’ Den. Their invention, a remote control that works like a magic wand, has been flying off the shelves. How many of us secretly wish that we, too, could come up with a brilliant idea, if only we had the inspiration?

Alas, those so-called ‘lightbulb moments’, be they for a new product, a screenplay or simply an original theme for a child’s birthday party, are all too rare.

Apparently, innovation is a struggle even for those who are paid to be creative. A recent survey by the British Library of 1,000 people working in creative industries found that 52 per cent said they had never had an idea for an invention, and of those who did, 67 per cent said they’d never done anything about it.

So, what exactly is stopping us? ‘There is a certain mythology about how ideas are born,’ argues Steven Johnson, author of Where Good Ideas Come From. ‘There’s a narrative thrill about the so-called eureka! moment. We all like to believe that ideas come suddenly, and that the person must be alone, in a deep contemplative state. Yet if you look at the history of breakthrough inventions, these stories are the exception.’

The magic wand inventor, Chris Barnardo, bears this out, for he did not come up with his idea in a darkened lab. Instead he got his inspiration while watching a Harry Potter movie with his children. He mentioned the idea to an engineer friend one night in the pub, and the rest is TV history.

In researching his book, Johnson discovered that, throughout history, great thinkers usually worked closely with clusters of other great minds, a practice that allowed them to borrow ideas freely and collaborate with others. ‘It’s a principle that applies to everyone, no matter what it is they’re trying to find inspiration for – from world-changing scientific theories to coming up with new ways of keeping your kids amused. The brain works by making connections and associations. That is how ideas are really born,’ he says. ‘One of the best ways to get more inspired is to surround yourself with people who have different skills and a different sphere of interest than you. Inevitably you’ll get an exchange of new perspectives and information. This is why company brainstorming sessions rarely produce anything of value – they get all the accountants in a room together for a day and hope to come up with something new. It’s a waste of time.’

Interior designer Gina, 39, discovered the benefits of reaching out to a diverse ideas pool when she joined a local business networking group. ‘The word “networking” used to make me feel ill, but I needed help to find new clients. At first I was doubtful. Our group consisted of a guy who installed CCTVs, a plumber, a sandwich shop owner and an aromatherapist.’ However, she quickly saw the benefits. ‘The guy who installed the security cameras suggested that I make a series of short “how-to” films with tips to revamp your living space, and post them on YouTube. I’d never have thought of that, let alone known how to do it. The plumber had loads of ideas about bathroom design, an area I’d always steered clear of. And I was able to help a couple of them with their office interiors. In a year we all saw our businesses expand.’

Apart from the myth of the lone genius, the other common misconception about inspiration is that it happens instantly, as poet Robert Browning put it, ‘being stung by the splendour of a single thought’.

According to Mark Sheahan, inventor in residence at the British Museum, this is a fallacy that stops many people ever pursuing their ideas to completion. ‘Developing a new idea is a long journey. People give up because they believe if it’s a great idea, it’ll take shape immediately. But ideas need to be nurtured over time.’

Johnson agrees, pointing out that most inspiration comes in the form of a slow hunch rather than an instant revelation. ‘Ideas generally come into the world half-baked, largely because genuine insights are hard to come by. Most of us start out by having incomplete ideas and, more often than not, the missing element isn’t even in our own brain, it’s somewhere else.’

Johnson’s book details some examples of how this works. For example in 1870, Stéphane Tarnier, a French obstetrician, spent his day off at the Paris Zoo and noticed how newly hatched chicks were thriving in a heated incubator. He idly wondered if the same technology might work with babies, and an idea was born – but it took years of research.

Similarly, software designer Tim Berners-Lee had grown up with a household encyclopedia, Enquire Within Upon Everything. He became obsessed with capturing random information in a single volume, and eventually invented the World Wide Web, whose prototype name was Enquire. If it takes so much time and effort, is it unrealistic to expect that we are all capable of creative genius? ‘Absolutely not,’ says Sheahan. ‘We all have great ideas, but might not realise it, or know how to proceed. To realise inspiration, you need to connect deeply with it. When I have a new idea it’s like having a baby. It’s the last thing I think about at night, the first thing in my mind when I wake. I totally immerse myself in it, but it’s not all hard work. A lot of it is about having fun.’

Jonathan Ellerby, author of Inspiration Deficit Disorder, goes further and suggests that if we don’t make an effort to get inspired, we can become lethargic, depressed and prone to unhealthy lifestyle habits. ‘Inspiration is a choice. People think they have to wait to be inspired but that’s not true. Instead you should become an inspiration hunter. That’s what the great poets and thinkers of the past were. They cultivated their capacity to get inspired.’

Ellerby works as a therapist with artists, and he believes there’s a connection between difficult emotions and inspiration. ‘People will often tell me, “Oh I’m not feeling inspired. I feel depressed or angry or sad”. But really we need to learn to channel those painful emotions into our work, whatever form that might take. Emotions are fuel for inspiration and we shouldn’t wait around until we’re feeling happy enough to create.’

Artist Cat Bennett, author of The Confident Creative, believes that another challenge is learning to spot promising ideas. ‘How do we recognise inspiration? Our rational mind often doesn’t believe in what it doesn’t know. It relies on established data and on what’s already been done. Usually inspiration takes us to a new space – we feel excited, humbled and happy. And, most importantly, true inspiration makes us want to take action.’