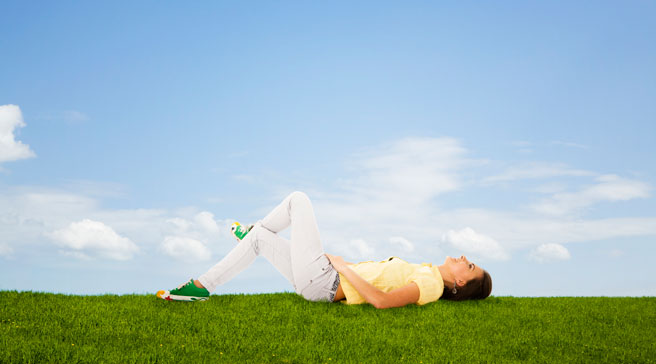 Kate was almost relieved when the school term started. She no longer had to get up at 6am to prepare packed lunches before driving the children to their various courses and rushing to work. Now she dashes home to pick them up from their after-school activities before taking work calls amid the noise of squabbling over supper. She’s often up till midnight working and doing laundry.

She can just about hold everything together, until her boss asks her to come in for a 9am meeting.

At home and work we have become increasingly more demanding as we have more choices to make than ever before. Increasingly, research shows that so much choice and opportunity leaves us feeling needy and incomplete. The harder we work, the more stuff we want to accumulate, the more we consume, the hungrier we seem to get. Much of the time, we’re concentrating on resolving crises instead of preventing them. Many of us are exhausted, but only realise it when an apparently small problem floors us.

It is estimated that 100,000 Britons have chronic fatigue. Many more feel wiped out or physically and mentally depleted. Dr Frank Lipman, author of Spent? End Exhaustion & Feel Great Again, has identified the condition in hundreds of his patients. He believes feeling spent is an understandable response to the times we live in.

Katherine, 36, a graphic designer, was ‘spent’ for years before she realised what was causing her constant run of infections and illnesses and her inability to concentrate at work or at home. ‘I went from feeling out of sorts to being drained beyond anything I’d known,’ she says. ‘My exhaustion wasn’t just physical — my work was sedentary, and I took moderate exercise. But I couldn’t work. I couldn’t concentrate. “Spent” is a good word for it. I felt as though I had nothing left to give.’

Madeleine Bunting, author of Willing Slaves, an analysis of our culture of overwork, puts it simply. ‘We live in a world where nothing is enough,’ she says. ‘Debt drives us to work harder, the overwork puts strain on our relationships and without the support of those we love we become more insecure and exhausted — which makes us less efficient at our jobs, which, in turn, makes us more insecure, and so on.’ In our heads, we’re always thinking about the future rather than enjoying the present. ‘We are out of the now,’ she says, ‘which is an exhausting place to be.’ What’s the solution? When Katherine’s doctor couldn’t find anything clinically wrong with her, he prescribed antidepressants. This, says Lipman, fails to address the root of the problem.

He prescribes remedies that don’t require more time and planning:

• Turn off all technology by 10pm.

• Restorative, rather than exhausting exercise. Focus on yoga and simple programmes, such as alternating a minute’s brisk walking with three minutes of relaxed walking for half an hour.

• Take ‘breathing breaks’ throughout the day — five minutes of eyes-closed meditation, go for a short walk or listen to some relaxing music.

Lipman also stresses the importance of friends and family to our wellbeing. But for those caring for elderly parents and children, this is part of the problem. ‘People who are stress-prone always feel they ought to be doing something,’ says psychotherapist Sue Cowan-Jenssen. ‘They are driven by tasks: they can’t let things go or relax if there’s stuff to be done. You have to look at what you can realistically do. This can be very difficult: if you’ve got an aged parent, where do you draw the line?'

• Remember that we are all entitled to a boundary.

‘Some of us are more prone to worry,’ says Cowan-Jenssen. ‘Perfectionists put themselves under huge levels of stress. Parents worry that their children have to have freshly cooked, organic food, the house has to be clean and stylish… But you have to ask yourself, does it really matter? Think about the imperatives you live by, and ask yourself: where’s the evidence? What makes you think you’ll lose your job if you make one mistake, or that your lover will leave you if you don’t lose weight?’

The prospect of making changes sometimes feels more exhausting than leaving things the way they are. Being told to look after yourself, and make an appointment at a spa requires time and money, and if you’re already stressed it can feel impossible. ‘People who are really stressed can’t make changes because they’d feel like a failure,’ says Cowan-Jenssen. ‘The main thing is to get some perspective. If you’re under stress you treat each task as though it’s life or death and has to be done. If you don’t get an overview, you’re just waiting for the next thing to hit.’