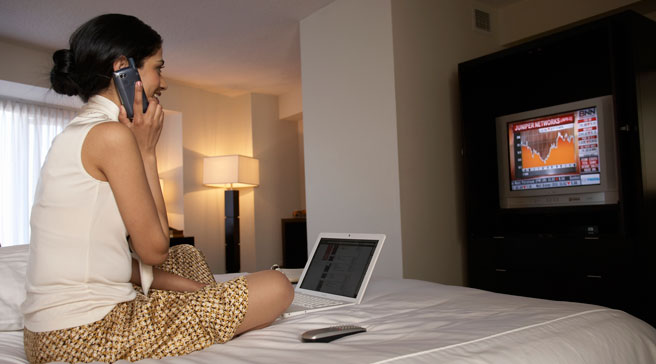 I’ll admit it. Sometimes I stay out with friends longer than I really want to, because I don’t want something exciting to happen when I’m not there. I’ve been known to watch films I don’t care for, too, simply so I’m not left out of conversations about them. And occasionally I’ll spend entire evenings checking emails/Twitter/Facebook because I’m desperate to see what’s going on elsewhere, rather than paying attention to what’s going on right in front of me. It seems I might be suffering from FOMO. ‘The fear of missing out – FOMO – is a type of anxiety, a sort of anticipatory regret,’ explains psychologist Dr Rebecca McGuire-Snieckus. ‘It’s brought on by being aware of so many alternatives, by seeing other things that you could be doing, or having, or being.’

Strictly speaking, it’s not a new phenomenon. Rather, says Psychologies psychotherapy columnist Philippa Perry, ‘it is a modern take on the grass being greener on the other side.’ But experts do agree that the syndrome has been exacerbated by the internet. ‘Social networking fuels FOMO,’ says McGuire-Snieckus. ‘Platforms for social comparisons, such as Facebook, LinkedIn and Twitter, make it more apparent to people what they aren’t achieving, doing or having.’ And this has significant, negative effects.

‘An awareness of these alternatives causes inherent dissatisfaction because you could have equally attractive paths, and when you select one you could feel regret over the one you didn’t choose,’ she says. ‘It results in dissatisfaction, indecisiveness and, ultimately, debilitation.’ Fiona, 27, realised that FOMO was becoming a major problem, causing her to neglect close friendships and a hobby she loved. ‘My job is very social and I get invited to events most nights,' she says. ‘I hate saying no because everyone talks about it the next day in the office. I started cancelling the odd night out with friends so I could keep up with my colleagues, and then it happened more and more often. Then I discovered my friends had been going out without even asking me if I was around. ‘If I’m honest, I never have much fun at these work things. But I feel I have to go, in case I miss out on something exciting, or on someone who could help my career. By the weekend I’m exhausted, and I can’t even remember the last time I made it to a netball match – I used to play every weekend for my local team, but just can’t face it anymore.’

Michael Heppell, success coach and author of How To Be Brilliant, observes, ‘The biggest danger of FOMO is that it saps time. Rather than actually doing something, people spend time worrying about what they’re not doing. They are so terrified of what they’re missing that they end up missing things.’ And this year is a significant one for FOMO – it’s the first time that sales of smart phones have overtaken sales of personal computers. Being connected is no longer restricted to being at home or in the office, it’s something we are able to do 24 hours a day, seven days a week. And when FOMO sets in, the effects can spiral. ‘It can start to affect every area of your life,’ says McGuire-Snieckus. ‘From going to a restaurant, choosing a dish and then thinking, “I should have ordered the carbonara” to going on Facebook and seeing pictures of someone’s newborn and thinking, “I wish I was having a baby”.’

From anxiety about keeping up, it seems you can become dissatisfied with your family, your partner, your job or your life. There’s no doubt that some of us will be more affected than others. Benjamin Voyer from the Institute of Social Psychology at the London School of Economics explains: ‘Fear of missing out is first and foremost a fear of social exclusion. When you are at the top, when you have power, you are not so concerned about it. You are the reference, and people come and see you.’ Teenagers, he says, are more susceptible. ‘The period of life when you turn 12 or 13 is a key moment in forging your identity.’ But all sorts of people can find themselves at the mercy of FOMO. ‘I’ve observed some very bright, articulate, intelligent people becoming caught up in this in a way I never thought they would,’ says Heppell. ‘The pressure to be part of things that seem important is huge.’ Susan, 44, is exhausted by the pressure of keeping up. ‘My friends are a well-read, well-educated bunch, so I feel I have to know about the latest goings-ons – the big new authors, the politicians who are in favour this week – if I want to be part of the conversation,’ she says. ‘I always feel I should go to the new exhibition at the Tate when I go to London, when all I really want to do is go shopping. I never read, watch, or even do the things I want to any more – just the things I think I should be doing.’

McGuire-Snieckus thinks susceptibility to FOMO has more to do with personality profiles than power or age. So-called ‘satisficers’ are less likely to suffer. ‘They have an idea of what they hope to achieve or to have, and once they achieve that, they’re fine,’ she explains. ‘They are happy with that, so stop comparing and look-ing for more. ‘By contrast “maximisers” are always looking at the alternatives and thinking of what else could be. They prefer to explore every option until they make a decision. Even when they do make a choice, they worry that they haven’t made the best one, feeling less satisfied with the decision they have taken.’ But FOMO can be good for you. ‘It can be hugely motivating,’ says McGuire-Snieckus. ‘Dissatisfaction drives some people – especially maximisers – to be stronger, faster, better.’

I can certainly vouch for that – there have been many occasions I’ve visited galleries, read books and grudgingly gone to social events because I didn’t want to be the only one who hadn’t, only to find I had a wonderful time. There is a fine line between using FOMO to motivate, and being overwhelmed by the anxiety and tensions it can cause. McGuire-Snieckus has some advice for those plagued by the fear of missing out. ‘Try to live in the moment – enjoy what you’re doing right now, rather than looking at someone else’s life on Twitter or Facebook and wishing you were them. Stop making upward social comparisons, and make a few downward ones. Look at the positives of your life, stop and think, “Wow, look at what I’ve achieved.”’ You might just realise that the grass was greener on your side all along.