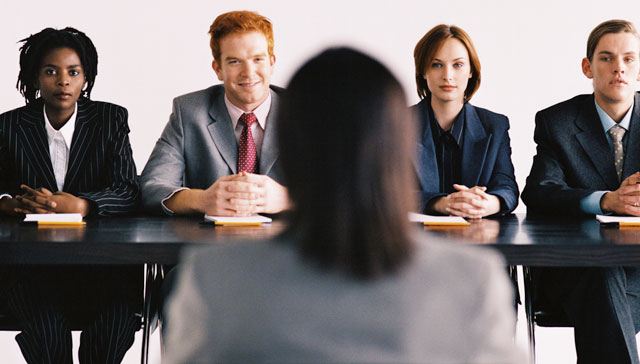 Brushing up on your interview techniques, having a confident manner and knowledge about the company will all help you on the day.

But a little extra help rarely goes amiss, which is why we’ve compiled a guide to some of the interview techniques and application processes that you may meet on your search for a new job. Don’t worry, you won’t be asked to carry out Apprentice-style tasks, but you might need to be prepared for multiple interviews, group assessments, speed interviewing or even an ‘application vacation’.

1 How to answer difficult questions Some interviewers delight in asking difficult or bizarre questions: how do you nail jelly to a wall? If you were an animal, what animal would you be? ‘The first type of question is looking for free thinking, and the ability to make connections – it’s not actually testing the answer, it’s testing the process,’ says John Lees, careers consultant and author of How To Get A Job You’ll Love. ‘So if you’re asked how many pints of milk it would take to fill St Paul’s Cathedral, you’ve got to think aloud and say, “Well it’s approximately this long, this high, it’s this many cubic metres, that takes 1,000 litres of milk. It doesn’t matter if you’re out by a significant factor, it’s the fact that you’re prepared to have a go at it. The second type of question is testing your sense of humour and adaptability, so it’s best to deal with it lightly. Even if what you’ve said means nothing, a degree of wit is important.’

2 How to ace a second interview Being invited back for another interview is a great boost, says Lees. ‘If you’re invited back, you’re clearly in a strong position,’ he says. ‘I would always ask who you will be talking to and what this second (or subsequent) interview will be focusing on. What do you need to prepare? And, most importantly, what concerns does the employer have that came out of the last interview? If you know the worries they have in mind, you can deal with them.’

3 How to approach group assessments Being placed in a group with a shared task and an observer to monitor your performance can be daunting. ‘The observers are picking out the degrees of co-operation, interaction, control, direction and influence,’ says Lees. ‘You might think that you have to transform everything about your performance and your personality to win, but if you improve what you do by five to 10 per cent, that starts to give you an edge.’ If the employer is looking for a broad range of skills, rather than specific leadership skills, the best position is one of balance. ‘It’s about showing that you can think but also that you are reasonably extrovert,’ says Lees. ‘That you can chair a group, but that you can also sit back and be a participant. That you’re an ideas person, but that you’re capable of implementing ideas. Go for that mid line – the selectors can’t mark you down as being unusually quiet or too strong.’

4 How to hold your own outside the interview room Sometimes a potential employer might invite you to lunch, drinks or even an ‘application vacation’, an entire week spent with your potential employer, where you’re under assessment inside, and outside, office hours. According to Lees, ‘the principle is – it’s always an interview. Whether it’s drinks or lunch, you’re being assessed. So it’s about moderating certain behaviours and about taking advantage of the opportunity to speak to people. And ordering something you can eat without wearing it.’

5 How to prepare for an interview when you’re out of practice If the thought of speed interviewing (like speed dating), psychometric tests, or being interviewed by a class of eight-year-olds, as one primary school teacher was, leaves you cold, realise that not all application processes are like this. ‘Generally, I would say worry more about the basics that can get you screened out quickly, and less about the stranger processes, which happen less often,’ says Lees. ‘The bigger worry is when you’re not used to presenting yourself – and it’s a much bigger barrier for senior people, who might not have had an interview for 20 years or more. Don’t forget the basics, such as how to manage the first two minutes and establish a really good relationship. Consider in advance what questions might come up, and prepare for them. And if you think about what interviewers remember it’s not always facts, details and evidence, but the stories you tell. Try to reflect on this in advance, so you get the content right.’