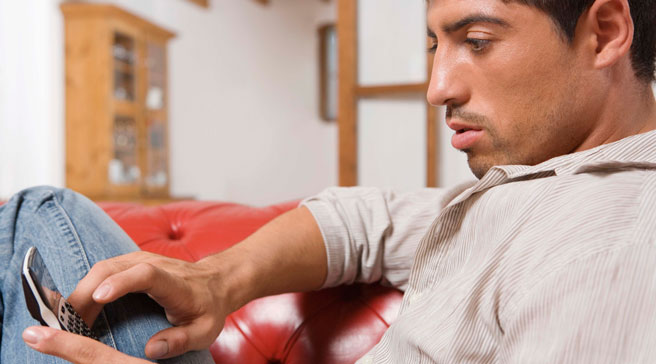 Rowena’s partner Tom was made redundant from his job in sales just before Christmas. ‘We’d known it was coming but it was still a bit of a blow,’ she says. ‘We worked out that with a few cutbacks we could still afford our mortgage on just my salary and, for a while, we congratulated ourselves on doing so well.’

Six months in, and some cracks have appeared in their relationship. ‘I’ve become so much more aware of what I do around the home and what Tom does, and I’m shocked,’ she says. ‘Since we let our cleaner go, he hasn’t cleaned the bathroom once. As a test, I hid the cleaning products, and he hasn’t bought any new ones. Also, I never used to notice the amount he drank before, but now I count the number of glasses, totting up the cost. I hate that I do this, but I can’t help it.’

Over the past year, more women have inherited the mantle of breadwinner. And, whether that’s through choice or necessity, they and their partners are discovering the consequences of job loss. At first, our chief concern might be, ‘How will we pay the mortgage?’, but beyond that lurks a bigger question. It might sound innocent — ‘How will we both feel if you’re at home all day?’ — but for many couples, the implications are huge. No matter how egalitarian your relationship, the shock of redundancy brings with it a threat to the old model of your life as a couple.

‘Our generation is caught in the thick of a paradigm shift and our values have yet to catch up with our new roles in the workplace and at home,’ says Harriet Pappenheim, a couples therapist and co-author of For Richer Or Poorer: Keeping Your Marriage Happy When She’s Making More Money. ‘When women eclipse men as the primary breadwinner, it can undermine both partners’ sense of what it means to be male or female. Ironically, the workplace, once thought to be hopelessly traditional and conservative, has become quicker to respond to changes than the home has.’

In any relationship, there are different spheres of power — money, control of the home, sex. Usually, we find a balance that suits us both, and for most couples in the twenty-first century this means basing decisions about the home or the bank balance on what suits us best as individuals, rather than what’s ‘appropriate’ for men and women.

But we’d be naïve to think that our decisions are free of cultural influence. ‘Many of us think that, on an intellectual level, it shouldn’t matter who does what. But gender always matters,’ says Professor Janet Reibstein, author of The Best Kept Secret: How Love Can Last For Ever. ‘Our social roles are changing, but they still mean something. The default position is that a man still achieves power through work, so everything is undermined when he is out of work.’ Although we might like to think we will behave differently, it seems that redundancy can be the catalyst that propels men and women into even more conventional roles, as we try to keep some semblance of ‘normal’.

Researchers at the University of Washington found that the more money a wife makes, the more housework she actually does in proportion to her husband. Janine, 42, can relate to this. ‘I sometimes think I take on extra housework to legitimise the arguments I want to have with him. It’s easier to pick a fight about washing up than it is to voice the fact that I resent the financial responsibility, and think he’s failing me as a husband. But that feels too big and hurtful to say.’

Another thing we don’t like to admit is that many of us do expect to be provided for. Pappenheim found that women are still reluctant to marry men who earn less than them. And, as Colette Dowling noted in The Cinderella Complex, many women expect to be ‘saved’ by their partner. We may not have a career plan past 35 because we still believe that someone else, our husband, is going to take care of us. We may not like to admit it — in fact, we may not even be conscious of it — but our relationship could be built on the idea that we will be financially supported. The effects of all this upheaval can be extremely isolating. We resent our partner, but also ourselves. We aren’t comfortable with these feelings, which we know are unfair, and feel we can’t express them. It’s easy to let petty grievances and resentment overwhelm our tolerance, compassion and even our sense of humour, especially if we are dealing with a partner who is battling his own sense of guilt or failure. So how do we break the cycle and start communicating again?

A useful starting point for a fresh conversation can be to discuss how both of your families dealt with work and money. It’s often a safer way of negotiating difficult issues, but can also give you insight into your own beliefs about men, money and work. ‘My father was often between jobs when I was growing up. He was around the house a lot while my mother worked incredibly hard to keep us all afloat,’ says Amanda, 34. ‘I hadn’t realised until I discussed it with my fiancé, but I’d grown up thinking that real men worked in offices, and the worst thing you could do was saddle yourself with a feckless husband, because it meant you’d be trapped.’

Prepare to redraw some of the boundaries of your relationship, says Pappenheim. ‘Don’t think in black-and-white terms. Partnerships don’t need 50—50 divisions of labour and income. What is key is that each partner contributes something valued by the other. Learn to value him for more than the traditional male currency of providing. Let him know that when he cooks dinner, it makes you feel nurtured and supported. These are the qualities he may think he is no longer able to bring to the relationship.’ Honest, open debate can mean that you emerge from this crisis not obsessed with your conflicting needs, but working together for a more positive future.

Read Happiness comes from giving, not buying or having by Dr Steve Taylor on LifeLabs