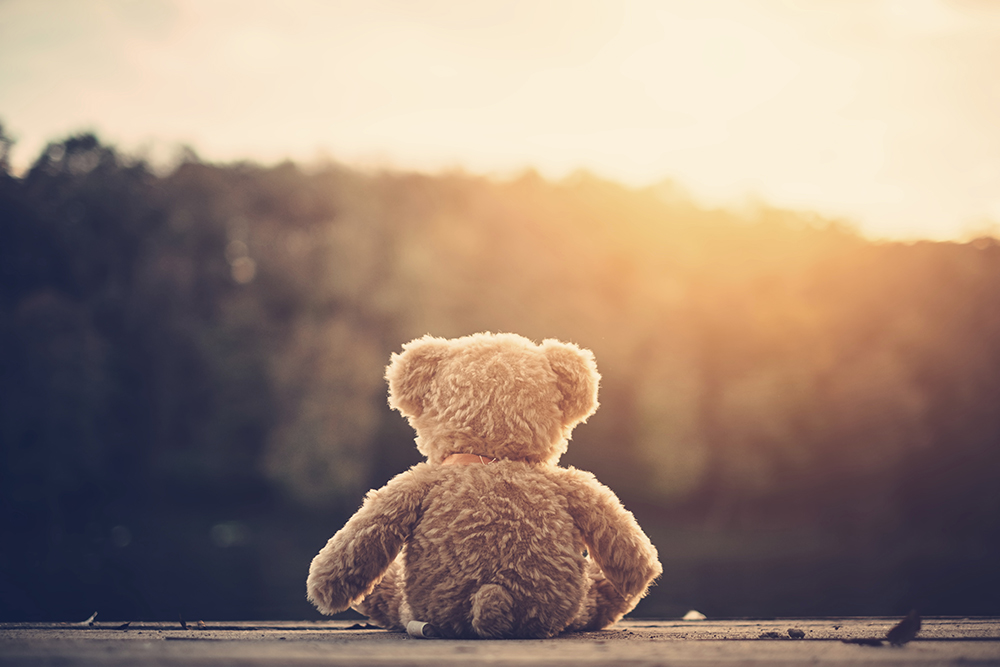 Your child’s favourite toy is lost. For years, they have taken it everywhere. You even have a spare, just in case, and then disaster… You’re down to the spare and it gets left on a bus/plane/train and the child is distraught.

In my middle daughter’s case, it was a small red Teletubby – Po, to the uninitiated. She’d suck her thumb while holding Po to her nose at all times. It was her security blanket, and her fear of losing it was matched only by ours. Then, one day, the inevitable happened. There were tears on her part and trepidation on mine. How would she cope?

And yet – she was fine. Bedtime that first evening without Po was a bit of an ordeal. ‘I can’t sleep without her!’ my daughter wailed. I produced a succession of alternative bedfellows, but none met with her approval.

In the end she went to bed with a pair of pants which apparently had ‘the right label’ but, after a while, the weirdness of going to bed with underwear, albeit clean, dawned on her and she abandoned that in favour of simply sucking her thumb.

School and all other social situations where Po was a comfort, was another matter. By nature a little shy and unsure, she used the toy as a buffer between her and the rest of the world. Without Po, she’d have to confront it and the people in it. Initially she was scared, sucking her thumb more than usual.

But a thumb can’t be lost and if you take it out of your mouth, you don’t have to fret about where it is and you can get on with interacting. Which is what she did. She blossomed, becoming more confident and less afraid of the world.

It’s not only children who rely on physical objects for security. Adults do too, says psychologist Dr Sheila Keegan, and are equally affected by their loss. But that loss can also be exactly what we need to happen.

‘“Things” are the props of our life,’ says Keegan. ‘It makes us feel secure to be surrounded by familiar objects; it bolsters our sense of identity. But there must be a balance between security and readiness to embrace change. Losing things can force you to embrace change in a way that can be hugely positive.’

They may only be ‘things’, but our belongings can acquire sentimental value. Jo Carson, an artist and mother of two young children, spent much of her childhood with her grandmother around her grandmother’s belongings.

When her gran died, her Victorian armchair became much more to Jo than just a piece of furniture.

‘I always think of her, sitting in it by the fire, and then, after she died, my mother had it in her bedroom. When I inherited it, although it was far too big for my tiny sitting room, I found its presence reassuring: as if both my mother and grandmother were still watching over me.’

The chair, however, was a source of stress as far as Jo’s children were concerned. It got in the way, and they were always wary of spills and tears. Then one of their teenage friends accidentally set fire to it with a cigarette and it was damaged beyond repair.

‘Initially, I was really upset,’ says Jo. ‘But then it felt like a relief. I removed some of the fabric and made a miniature replica, a memento of my mother and grandmother, but not one that gets in the way of us living our lives.’

A spur to move on

This is quite a common reaction, says Mairi Russell, a Hoffman therapist. She believes losing things can be the spur that allows us to move on. Permanent records of our lives can imprison us with unrealistic feelings about our relationships and don’t allow painful memories to fade.

‘In Western society, we’re afraid of grieving so we cling to things that remind us of loved ones. Losing those things forces us to grieve and get over loss, which is ultimately healthy.’

Objects can also turn us into archivists of our own lives. ‘We hold onto photos, letters and trinkets as they’re part of our history,’ Keegan says. ‘When we lose them, it can be liberating to discover we still exist. The past is there but the future beckons.’

Russell adds: ‘We also define ourselves through the consumer choices we make. So, losing things can be an opportunity to re-evaluate who we think we are.’

A few years ago Beth Perrin was new to a job at the BBC, one that seemed to require a certain style of dress. ‘I bought clothes to enable me to fit in, but I never felt entirely comfortable. About six weeks into the job, I moved flats. Having packed clothes into bin liners, I accidentally threw them away and transported the rubbish to my new flat!’

By the time she realised her mistake, the bins had been taken. But Beth saw it as a chance to wear clothes that were more ‘her.’ ‘I was able to be myself and I fitted in better than the person I was pretending to be. I was happier and could do my job better as a result.’

Katherine Joseph found it harder to show the world her ‘real’ self, when an airline lost her luggage containing not just her clothes, but also make-up.

‘I’m not the sort of person who faces the world without make-up, but we were on holiday in an area where I couldn’t replace it, so I had no choice. I felt enormously self-conscious in the beginning, but nobody seemed to notice and, after a while, I felt liberated.’

A couple of years ago, we went away for New Year and came back to find the house stripped of all electrical goods, including my computer, laptop and the memory sticks on which I’d backed up my life. Gone were photos, half-written articles, ideas files and the first draft of a novel, which I’d finished just before Christmas.

I wept. Then, after I had sorted out the practicalities, I picked myself up and began writing the novel again. It was published 18 months later and was, I believe, a much better read for the enforced rewrite.

As we drew up a list for the insurance, we started questioning the things that needed replacing. Not everything did. The VHS recorder we’d hung onto ‘because it still works’, but never used, left more space in the living room, and a kitchen mixer, given to us by a well-meaning relative, stopped making me feel bad about being a terrible cook who never used it.

The timing of the break-in seemed significant. It was New Year, a time for re-evaluation. It forced us to rethink what was important, what we needed, and what I’d been trying to create.

I took comfort from a quote from Chuck Palahniuk’s book-turned-film, Fight Club. ‘It’s only after we’ve lost everything that we’re free to do anything.’

Living With It by Lizzie Enfield (Myriad Editions, £8.99) is out now