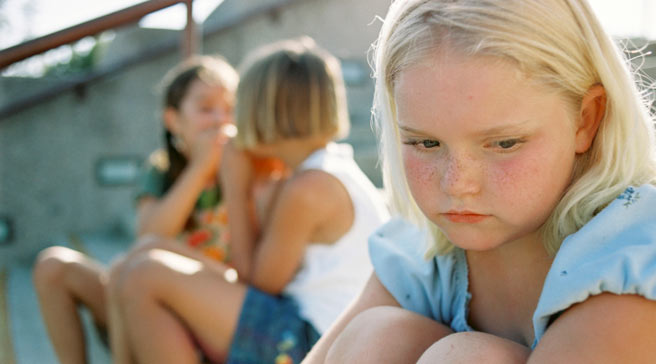 Since the age of nine, Chloe and Harriet had been best friends. In secondary school, they joined up with two other girls and the four spent all their time together.

But Chloe’s mother, Kate, noticed a gradual change in her daughter’s behaviour. She no longer met her friends in town on a Saturday, invitations to sleepovers dried up and she was withdrawn, irritable and weepy. ‘At first, Chloe refused to talk about it,’ says Kate. ‘Until, one evening, she received a malicious phone call telling her everyone was at Harriet’s house and what a wonderful time they were having without her. Chloe sobbed and sobbed. Then it all came out. Harriet had said she wasn’t her best friend any more and the group accused Chloe of trying to steal another girl’s boyfriend. Chloe hasn’t even had a boyfriend, but graffiti appeared in the school calling her a slag. They got others to give her the cold shoulder, too. ‘Chloe kept saying, “There must be something wrong with me…”

Yet, when we approached the school, the response was basically, “That’s how girls are.”  For us, that wasn’t good enough.’

Bullying among secondary school-children is more sophisticated these days. It can range from physical violence to verbal abuse; spreading rumours; theft of money and property; exclusion; abusive emails, texts and cyber bullying (nasty comments posted on websites). When Unicef published its recent report on childhood around the world, British children fared worse than many others, with nearly 36 per cent saying they’d been bullied in the past two months.  And, in a survey for Bullying Online, almost 70 per cent of children said they had experienced at least half a dozen instances of bullying.

The first step to helping

As a parent, if you suspect your child is being targeted, knowing how best to proceed can be deeply worrying­, especially if your child refuses to tell you what is happening. Elspeth, 42, knew something was wrong when Craig, her 13-year-old son, started going straight to his room after school every night, refusing to talk to her or his dad. ‘I knew there was a problem, but he was terrified to talk to me,’ she says. ‘I found out what was happening [Craig was being tormented by a group of older boys] only when another parent mentioned rumours about physical bullying. Craig hadn’t told me, as he was scared I’d step in and make things worse.’

However, Michele Elliott, of the children’s charity Kidscape believes parental intervention is vital. ‘Talk to the school. If a child could handle it, they would. If you don’t do anything, you collude with the bully. If you do do something, yes, it might get worse. You might have to take a child out of school. Or you might find other children equally victimised, and the school will be forced to take action. ‘Too often, the school will pathologise the victim of bullying,’ she adds. ‘The child is described as sensitive, it’s implied that the parents are neurotic. It’s less trouble to ignore the bullies than address the problem. So the parents of a bullied child may themselves feel bullied by the system.’

Peter Smith, professor of psychology at  Goldsmiths College, London, says that if a child doesn’t want you to intervene, suggest they keep a record of the bullying. ‘Talk calmly and stress the child is not to blame. Explain that if it continues, you’ll both talk again about whether outside help is needed.’ Single father Mark found this was the best approach with 17-year-old Grace. ‘She felt intervention from me would be embarrassing and would prevent her solving the bullying.’ Grace takes up the story. ‘Being bullied was frightening, but once I knew I could talk to dad without him stepping in, I felt calmer and able to deal with it on my own.’ A common question is whether some children are more likely to become victims of bullying. Smith heads a research group, which has been examining school bullying for several years. ‘Any child can be bullied,’ he says. ‘But risk factors cause some to be more vulnerable. For instance, if they are timid and unassertive, if they lack friends or have a different sexual orientation.’

The psychological impact depends upon the type and scale of the bullying and how an individual child feels about themselves. ‘Some have protective factors that make them more resilient,’ says Smith. ‘They may have been encouraged to develop coping strategies, such as telling an adult as soon as bullying occurs and understanding they have a right to be respected. Those who lack protective factors may feel degraded and unworthy, since bullying usually demands an audience and they will have been shamed in front of others. If they already suffer from low self-esteem, they may blame themselves.’

‘A lot of women in their early twenties have an erroneous image of themselves based on what bullies said to them when they were 12 or 13,’ says psychiatrist Dr Rachel Andrews. ‘Whatever is directed at a young person can go to the heart of what they believe about themselves.’

Kate believes that this is what happened to Chloe. A confident but rather dreamy child, being excluded by the other girls encouraged her belief that she wasn’t as engaging, fun or outgoing as she ‘ought’ to be. Psychotherapist Dr Sheri Jacobsen agrees. ‘Bullying encourages submission, which then strips away self-esteem and confidence,’ she says. ‘Especially if it occurs at a time of transition, such as child to adolescent. This is when a person’s identity is being shaped and negative feedback can have a big impact.’

But many young people can come through a period of bullying with their confidence enhanced, if adults handle the situation wisely. Jack, 14, became the victim of sustained physical and verbal abuse by a small group of boys. He was harassed, tripped up and beaten, yet the school turned a blind eye. Encouraged by his mother, Jack went to his head of year. ‘I didn’t name names. I just told her what had been happening.’ The tutor organised a class workshop in which they acted out scenes around bullying. One of Jack’s tormentors was chosen to roleplay a victim of malicious texting. ‘I could see him colouring up with embarrassment,’ Jack says. ‘Somehow, it made things better for me, and things have gone back to normal. It’s OK.’

Since 1999, by law, every school should have an anti-bullying strategy. At its best, this comes out of discussions with pupils, teachers, parents, dinner supervisors and playground staff. Workshops, peer mentoring, assertiveness training, mediation, counselling and training children to be buddies all helps. In practice, one in four schools still don’t have a strategy, while many of those that do only pay lip service. So, another area in which parents can wield positive influence is to insist that a strategy is drawn up and constantly reappraised.

In Chloe’s case, her parents did make a difference. ‘We organised a survey that revealed bullying was widespread,’ says Kate. ‘So a series of changes was made, including appointing older pupils as mentors. Chloe asked to be moved to another form and now has a new set of friends and seems back to her old self.  She’s certainly been bruised by her experience – but we hope not permanently wounded.’