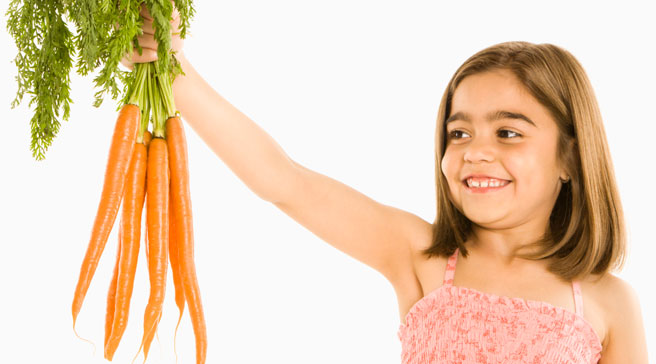 ‘Children can and do like healthy food,’ says Dr Pauline Emmett, nutritionist and dietitian at the University of Bristol, who worked on the Avon Longitudinal Study Of Parents And Children, an ongoing study following the diets of children from pre-birth (they are now 17). ‘It’s good to start young. Babies weaned on fruit and vegetables, rather than baby food, are much more likely to be eating those foods when they are older. It doesn’t have to be complicated — just a mashed banana is good.’

But it’s never too late to get your kids eating healthily. They need plenty of fruit and vegetables (at least five portions a day), starchy food (wholemeal bread, pasta, rice and potatoes), and moderate amounts of dairy and protein. ‘Don’t be too obsessive,’ says Sally Child, nutritional therapist and co-author with Karen Bali of The Art Of Hiding Vegetables. ‘As long as 75 per cent of the diet is healthy, they will survive the rest.’

1 'Eat healthily yourself,' says nutritionist Dr Pauline Emmett. 'Our studies have found that if parents are eating fresh fruit and vegetables, the children are far more likely to as well. One study by Cancer Research found that regular family meal times are associated wtih a better diet in children and more frequent intake of vegetables.

2 ‘Encourage them to eat new things,’ says Emmett. ‘It’s only natural for kids to be in a comfort zone, but we need to broaden their palate. Introduce one new item per meal, and don’t fuss if they don’t clear the plate.’ Christine Wood, paediatrician and author of How To Get Kids To Eat Great And Love It, suggests the one-bite rule. ‘Research shows a child may have to taste a food six to 10 times before they accept it, so encourage bites.’

3 Make food fun and build positive associations with mealtimes. Indulge your inner artist by making colourful pictures out of food, such as trains or smiley faces. ‘Young children can be persuaded to try almost anything if they like the sound of it,’ say Child and Bali, whose book includes recipes for rainbow chips, orange mash and toasty stars.

4 Take them shopping. ‘Ask children to select their own fruit and vegetables and praise them for their choices,’ says mother-of-two Bali, who recommends we take children shopping as soon as they are toddlers, engaging their attention by talking about colours, shape and textures. ‘You can later refer to these as “your lovely bananas”, for example. Taking trips to pick-your-own farms and growing your own also work well.’

5 Think outside the box. If your child would rather wrestle live snakes than eat vegetables, ‘add grated courgettes or carrots to burgers or meatloaf. Make smoothies and add carrot juice or vegetable juice,’ says Wood.

6 Plump for sweet flavours. ‘Research shows that some children have a genetic predisposition to disliking certain bitter tastes found in vegetables,’ says Child. ‘We think it’s due to an evolutionary throw-back where babies in the wild learned to refuse bitter tastes as they were more likely to be poisonous.’ Try roasting vegetables to bring out their natural sweetness (for example sweet potatoes, sweetcorn, carrots). Vegetables such as carrots or parsnips can be sweetened occasionally with honey or maple syrup, or try cooking broccoli or cauliflower in sweet and sour sauce.

8 Provide healthy snacks. Make sure you have plenty of healthy alternatives to junk food such as oatcakes, hummus, low-fat yogurt and carrot and celery sticks. ‘Other snack ideas are dried fruit, breadsticks or cereal bars (but watch the sugar content),’ says Bali.

9 Get them cooking. ‘Kids usually love helping to cook and it’s a great way of encouraging them to eat new things,’ says Bali. ‘Try pizza with tomato and vegetable toppings, and most children love making cakes (add fruit to give a nutritious kick). Even toddlers can help with stirring, while asking their opinion makes it harder for them to refuse the food.’

10 Watch your words, says Dr Sally Wiggins, psychology lecturer at the University of Strathclyde, who has researched how families discuss food at the table and how this encourages a healthy diet. ‘Give practical and positive advice such as “bananas will give you more energy”, rather than saying “this is good for you”, which is too abstract to be taken on board.’ And don’t pass on your fears about food or talk about slimming or diets — there should be no ‘bad’ foods for children.

Why BMI is flawed & must be abolished – Felicity Hayward

Curve model, body positivity activist and author Felicity Hayward tells us why BMI is an outdated measure that ought to be abolished… 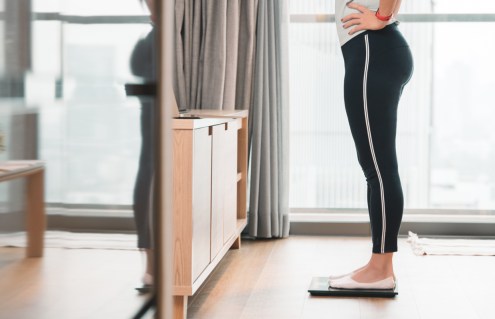 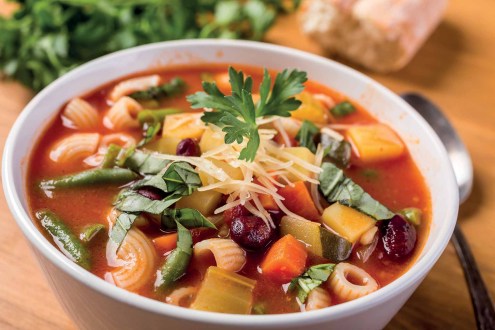